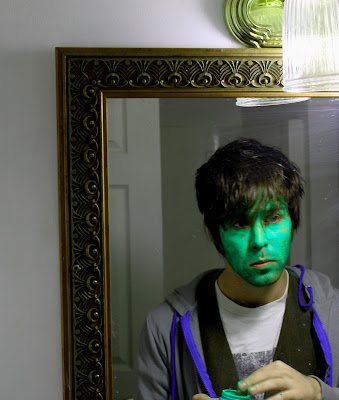 Despite a more than six month gap in any new release, Mirror Universe Tapes is still very much alive. So what does one of the best cassette label's in the country do after such an extended break? Start releasing great music right away, first off with Marshall Trotter. While going by the name Aux Arc, Trotter had released a few songs here and there, but the Small Troubles tape which he is releasing under his own name will help to bring his music together both past and present. "Jumps" is a good starting off point, a song Trotter had been working on since his Aux Arc days, but is fully formed now. It's what I would imagine quite, acoustic Dead Gaze (think "Stay, Don't Say) would sound like covering Animal Collective. At its core "Jumps" is an askew campfire song with very fun, haunting vocal, but the song kaleidoscopes from that tangent so well, stringing in so many bells and whistles (some times literally) that "Jumps" is never as it was only moments ago. Trotter may cut and paste the beauty of the song, but he rearranges it into something even more stunning.

Marshall Trotter's Website
Get the soon to be released Small Troubles tape here, from Mirror Universe Tapes
Posted by David at 1:49 PM