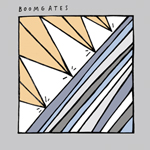 A constant problem with analyzing or even discussing any band's side project is the degree by which the main band's shadow is cast on the new band. Even if the sound of either band manages to escape focus, preconceived factors of quality come into play. This is what falls on Boomgates, where there is a small but unfortunate chance of them being remembered as nothing more than "the singer of Eddy Current Suppression Ring's indie rock band". Which is a pity because they really should go as "that fucking awesome Australian supergroup that formed that indie rock band!"

Due to how exceptional Boomgates debut single was, it's nice to know, though I guess not very surprising how easily they struck lightning twice. Two songs both dealing with communication problem's (on), both highly influenced from the entire spectrum of UK indie rock, and of course the Australian punk scene and sounds of each band member's respective band. "Layman's terms" is such a glorious song from the moment the song's duel guitar lines starts bouncing off on another in such a sublime fashion. The way Brendan Suppression's and Steph Hughes play off an intertwine with each other has to win some sort of award. "Nothing", the single's equally incredible counter part dives into the garage-punk spectrum, building tension with its verses before the explosion of noisy guitar riffs starts spewing out suddenly and violently. What could be the current front runner for this year's best 7 inch, Boomgates cause the same effect that I had ( and still do) when I put on a ECSR record; an endued giddy smile due to realizing how great the music I'm listen to actually is.

Boomgates' Myspace
Buy the single here, from Smart Guy Records
Posted by David at 11:38 AM